places to go in liverpool on a night out

So, you've heard about Liverpool, the nightlife, the people, the nights out, and the dam right good vibe that sets us apart from any other city in the UK. 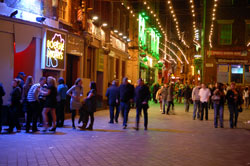 Liverpool is full of streets and streets of quality bars, clubs, after hour clubs and cool chic cafes. Time of writing this we have had 4 clubs, 2 bars and a brand new drinking hotspot (concert steps) added to the Liverpool nightlife scene along with St peter's Square, Liverpool's new trendy drinking quarter. You can think of Liverpool as one big hill of drinking hotspots and nightlife areas, start at the top of the hill around Concert Square or start at the bottom of the hill around Mathew Street. Any of these areas are a pefect starting point for your night out in Liverpool.

Dozens of people contact us each week asking us where the best places to go out are, it's not a simple answer. Because of the amount of good venues and drinking hotspots here in Liverpool, to fully enjoy the place you will need at least 3-4 visits to fully appreciate what Liverpool's nightlife has to offer you, and that assumes you stick to the one drink one bar policy while your here.

" Considering we are a group of 30 years olds, we avoided concert square. Don't get me wrong, it was buzzing with people but they were a younger crowd. If you are 18-25, head there, you will not be disappointed.

A good place to start is 'Concert Square' (pictured right) the center & heartbeat of Liverpool's buzzing nightlife, you'll instantly get a feel of what Liverpool is all about when you enter Concert Square about 10:30pm on a Friday or Saturday night. The same goes for 'Mathew Street' (pictured above), and if you're after something a little trendy then head to Victoria Street (next door to mathew st.) or St Peters Square (next to concert sq.) if you ever get lost just ask somebody.

We suggest you start at the bottom of Wood street and work your way up, once you get to the top you'll be on Concert Square pictured above. Sort of a mini Liverpool pub crawl.

" Sunday night at Liverpool's Italian Gusto bar & restaurant on Albert Dock, excellent food and service then finished off at the Cavern Club on Mathew Street to watch Beatles tribute band.

Another place you might want to try is over on the Albert Dock, great river views if you fancy a bit of sightseeing on your first visit to Liverpool. Check out Smugglers Cove, Gusto and Pan America, classed as Liverpool's trendy and up market patch loads of glamour and young professionals, and dress to impress is a must or you'll just look out of place. Overall, good pre-clubbing location with some good bar & restaurants if your out for a group meal then get yourself over to Concert Square or Mathew Street.

Or maybe head over to the near by Liverpool ONE and check out the trendy Palm Sugar bar, or have a visit to Liverpool's number one sports bar, Shooters bar Liverpool for the big rugby, football and boxing events. Lots going on for the nightlife over at Liverpool ONE.

And just across the road, literally, one of the best after clubs in Liverpool is G bar nightclub which has a mixed gay crowd and drag dj's, or have a night in HAUS Nightclub (formerly Passion) plenty of heavy club beats will see you drinking and dancing till 7am in the morning. 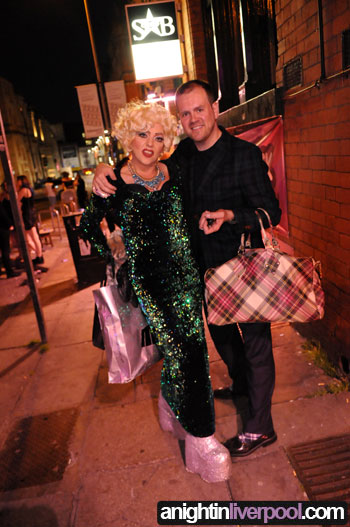 Stanley street is the centre of Liverpool's gay village. This area is well known around Liverpool as the main meeting point for many gay clubbers, transgender, lesbians, generally, the full LGBT family. Popular clubs include Superstar Boudoir, packed most weekends playing funky house, usually with drag hostess (pictured right), newly refurbished Navy bar just across the road and Lisbon pub which has a cheerful crowd young and old with quizzes and singsongs.

You will also find many similar gay venues, only moments away on Victoria Street, for instance, Club Heaven and OMG bar, likewise for late night Eberle Street mentioned above.

" For the older crowd: one place and one place only... Seel Street. Full of great bars. Revolutions to start. Good vibe and cheap drinks.

We've been getting the odd email about where to go besides Concert Square and Mathew Street. Clubbers complaining about too many lads and scallys in the bars and clubs. We recommend checking out the St peters square and Seel Street bars, ironically, 2 minutes from Concert Square.

It might also be a good idea to head up to Hardman street, popular student quarter which has a few funky bars, no scallys, live music and student type atmospheres.

We do tend to repeat ourselves quite a lot about Concert Square, so we must emphasize that Concert Square is the main drinking hotspot for Liverpool's nightlife on a Friday & Saturday night. Perfectly positioned, right in the centre of Liverpool offering you a mass of bars and clubs and walking distance to a lot of other popular drinking areas here in Liverpool, including: Seel Street, Wood Street, Slater Street and the trendy St Peters Square.

A prime drinking hotspot for Liverpool virgins and younger clubbers wanting to experience Liverpool's nightlife and nights out in Liverpool at its best.